skip to main | skip to sidebar

The Dude in the news! 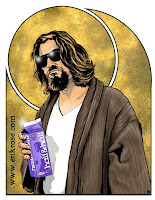 From the New York Times:

Dissertations on His Dudeness
By DWIGHT GARNER
Published: December 29, 2009

Joel and Ethan Coen’s 1998 movie, “The Big Lebowski,” which stars Jeff Bridges as a beatific, pot-smoking, bowling-obsessed slacker known as the Dude, snuck up on the English-speaking world during the ’00s: it became, stealthily, the decade’s most venerated cult film. It’s got that elusive and addictive quality that a great midnight movie has to have: it blissfully widens and expands in your mind upon repeat viewings.

“The Big Lebowski” has spawned its own shaggy, fervid world: drinking games, Halloween costumes, bumper stickers (“This aggression will not stand, man”) and a drunken annual festival that took root in Louisville, Ky., and has spread to other cities. The movie is also the subject of an expanding shelf of books, including “The Dude Abides: The Gospel According to the Coen Brothers” and the forthcoming “The Tao of the Dude.”

Where cult films go, academics will follow. New in bookstores, and already in its second printing, is “The Year’s Work in Lebowski Studies,” an essay collection edited by Edward P. Comentale and Aaron Jaffe (Indiana University Press, $24.95). The book is, like the Dude himself, a little rough around the edges. But it’s worth an end-of-the-year holiday pop-in. Ideally you’d read it with a White Russian — the Dude’s cocktail of choice — in hand.

This is just an excerpt of the article itself, which you can no longer access without registering online with the New York Times online (what a drag!).

But the whole idea is very, very promising.
Posted by JamyeO at 12:57 PM

I really enjoyed the blog

If I take care not to promote my new blog where I expose my drawings www.thesearemydrawings.blogspot.com
see and comment

Thanks a lot for sharing and I have some special things for you.
run and jump games
driving games online
drifting car games

I like what you shared in the article, thank you for that, it has given me more experience. I would like to share with you some interesting things, if you have free time and want to find a tool for fun read it now.i will always love you quotes for her Read and ponder the good quotes of life below, you will surely draw in life's own deep lessonstruyện ngôn tình hiện đại hoànOr you can go and search for the most fun games to play likedown một số games offline hay day. Surely what I'm introducing to you will not disappoint you. Please click and experience. Having fun.